Bitter melon is a wild cucumber grown in Bangladesh, India, China and Korea that is a part of many diets in those regions. It has been used to treat conditions including asthma and high blood pressure but is best known for its impact on glucose control and treatment of Diabetes. It can also help with kidney damage, a common side effect of Diabetes. It is commonly used in supplement formulation versus food, because it tastes as good as its name implies. However, Bitter Melon has many benefits, which is why we like to use this herb.

Qualities: It is high in Vitamin C, has antiviral properties, is an antioxidant, and helps with glucose regulation.

Uses: Bitter melon has many historical and theoretical uses, ranging from an abortifacient to a hemorrhoid treatment. It also has a long history of use as a hypoglycemic agent. Its hypoglycemic effects have been explored to the greatest extent and have aided in our understanding of its pharmacology and mechanism of action, leading to several studies looking at bitter melon as a hypoglycemic agent in type 1 and type 2 diabetes.

Description: Momordica charantia (bitter melon; bitter apple; bitter gourd; bitter squash; balsam-pear) is a tropical and subtropical vine of the family Cucurbitaceae, widely grown in Asia, Africa, and the Caribbean for its edible fruit. Its many varieties differ substantially in the shape and bitterness of the fruit.

Bitter melon originated from the South Indian state of Kerala and was introduced into China in the 14th century.

Bitter melon has been used in various Asian and African herbal medicine systems for a long time. In Turkey, it has been used as a folk remedy for a variety of ailments, particularly stomach complaints. In India, different parts of the plant are used as treatments for diabetes, to ease stomach complaints, as a laxative, for coughs, and to heal skin issues, wounds, ulcers and arthritic joints.

Momordica charantia has a number of purported uses including cancer prevention, treatment of diabetes, fever, HIV and AIDS, and infections.

Warnings: Don’t stop your Diabetes medication without consulting your prescribing provider. Side effects may include abdominal pain, headaches, diarrhea, and excessive drop in blood sugar. 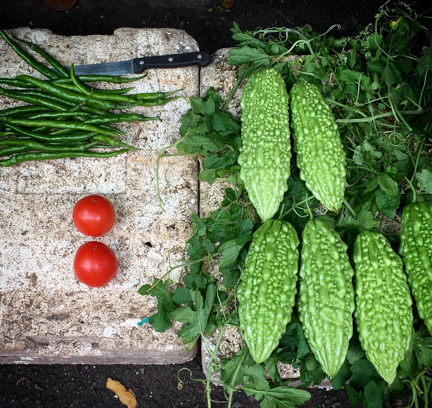